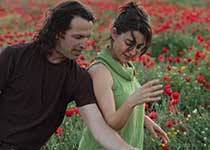 The Vertigo Dance Company founded in Jerusalem, in 1992, by Noa Wertheim and Adi Sha’al has developed a distinct artistic language promoting social and community awareness through the arts and established a distinct presence in the contemporary dance scene worldwide.
The Vertigo approach seeks to evoke artistic and environmental inspiration promoting social involvement in a responsible manner to sustain the future of our planet while bringing people together and expanding the boundaries of dance.
The Vertigo way of life encompasses:
The Vertigo School of Dance in Jerusalem, a refreshing and vibrant local meeting place offering various training and workshops for dancers from 'all walks of dance'.

The Vertigo Eco-Art Village midway between Jerusalem and Tel Aviv in the rural Elah Valley, a cultural center to explores and study the link between art and environment.

The Vertigo International Dance Program (VIDP) for professional dancers from around the world through Masa
The Power of Balance an integrative dance program for able and disabled dancers.

Vertigo is a contemporary dance company, offering a physical meeting place for artists and audience. Vertigo takes the viewer every time to a new or an unexpected, exciting and challenging journey into unfamiliar territories. Vertigo represents international standards of artistic excellence, with a social and community touch.

We see Vertigo as a messenger of Israeli Art at its best, at home and abroad, that comes to bring people closer together and touch them through the language of the body. As such, the company combines, in addition to its performances, master classes, workshops, co-productions with other companies from around the world and invites artists from different fields to create together with the company.

Shortly after her graduation from the Rubin Academy of Music and Dance in Jerusalem, Noa Wertheim was accepted into the Jerusalem Tamar Dance Company. It was there she met Adi Sha'al whose professional dance experience included both the Bat-Sheva Ensemble and the Kibbutz Dance Workshop. Partners in life and dance, Wertheim and Sha'al founded the Vertigo Dance Company in 1992.

Wertheim and Sha'al's first professional collaboration, a short duet called Vertigo, led to the establishment of their company of the same name. The inspiration came from the first-hand experience Adi had with the sensation of vertigo during his years in training with the air force. Vertigo - the performance - was built upon the concept of spinning out of control, not just in the air, but in relationships as well. Sha'al remarks, "Noa and I created a piece which looks at the loss of direction - the dizziness - in the human duet."

2000 “The Gas Heart” won the best performers and the best actor in the “Alternative Theater Festival”, Budapest.